Discover the enchanting beauty of the abandoned park in Hue

The abandoned park in Hue, also known as Thuy Tien Lake Park, is an interesting tourist destination for many tourists, especially those who love to explore and experience the strange scenery of the ancient capital.

Hue is always in the top of the land attracting tourists near and far because of its gentle and poetic beauty associated with many famous landmarks such as Huong River, Ngu Mountain, Truong Tien Bridge, Hue Citadel, Thien Mu Pagoda . But Hue not only has poetic scenery and ancient architecture but also owns many other impressive destinations that Thuy Tien Lake Park is the most popular representative with its spooky beauty attracts tourists, especially those who love to explore beautiful - unique - strange landscapes. 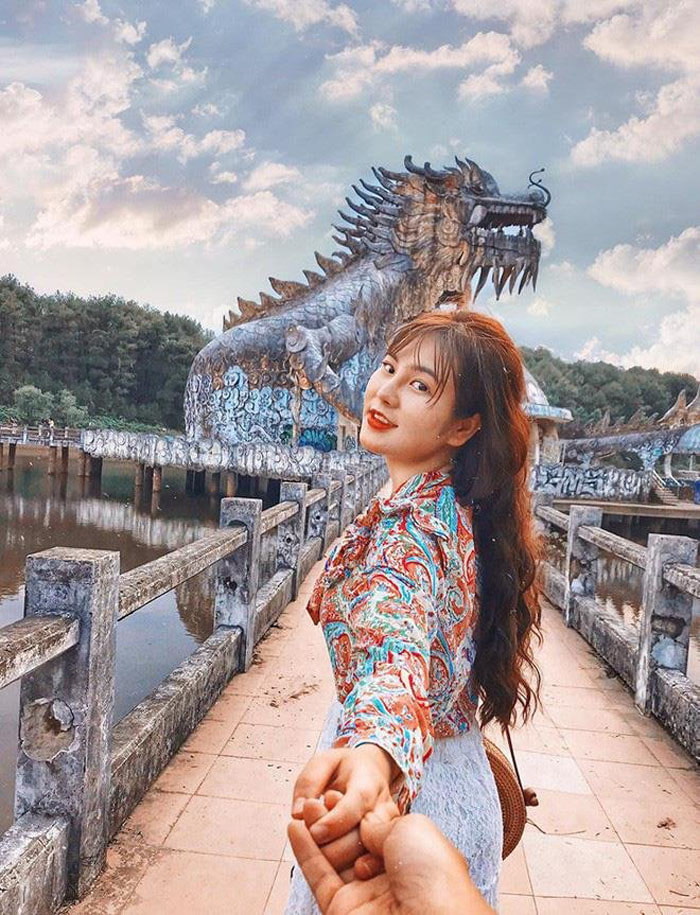 Since appearing on domestic and foreign newspapers with a somewhat creepy beauty after years of abandonment, Ho Thuy Tien resort has become a popular Hue tourist destination and is visited by many tourists, check-in photos, especially in recent years. Moreover, this unique abandoned park in Hue is also in the top of the famous terrifying abandoned lakes in the world as well as on the list of destinations attracting more foreign visitors.

Why is Ho Thuy Tien resort becoming an abandoned park in Hue?

Ho Thuy Tien entertainment area invested by Hue tourism company. The construction area for entertainment and entertainment purposes was built from 2000 to June 2004, and is completed with many main and auxiliary items such as the aquarium, ecosystem, and water music area containing 2,500 seats, the system of high-class bedrooms located on the hillside, ... and gradually put into operation.

However, after completion, the project did not perform as expected and ended up being closed. In 2008, the investment company transferred the project to Haco Hue Company Limited. But then, the new management unit of the park had a delay in putting the project into use, so the People's Committee of Thua Thien - Hue province made a decision to acquire the land and hand it over to the provincial Department of Natural Resources and Environment for management year 2017. 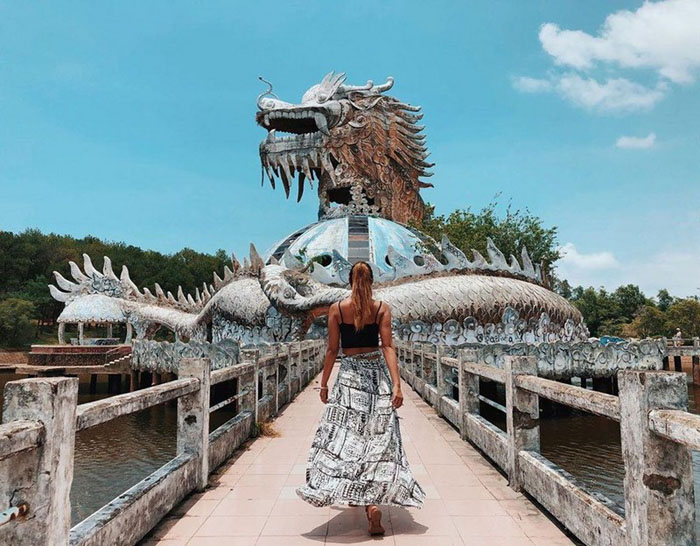 After being changed by the owner and manager, Ho Thuy Tien tourist area has become an abandoned park in Hue for a long time and it was not until 2016 that many tourists noticed. The reason originated from an article published in Huffingtonpost.com (USA) by female author Suzy Strutner. With the title "Abandoned water park in Vietnam, not for the faint of heart", the article has provided devastating images, some places even somewhat spooky and creepy of the resort this. 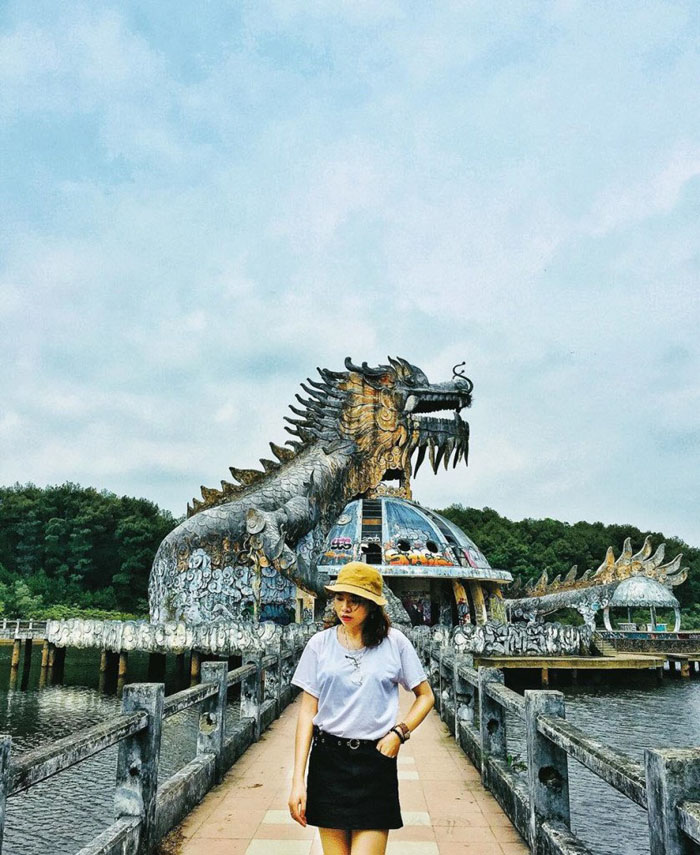 Every small to big detail of the project over a long period of time with the harsh weather of the Central, unattended has exuded a very mysterious beauty and that is why it contains the attraction. very own difficult to find in any tourist area or any other works of the ancient capital. Many Vietnamese and foreign newspapers or other travel blogs also follow the Huffingtonpost to add a series of articles about the Ho Thuy Tien resort and evaluate this as an interesting destination of Hue, beside familiar places such as Dai Noi, Nguyen Trieu tombs, Dong Ba market or Truong Tien bridge .

Where is the abandoned park in Hue located?

Ho Thuy Tien Park is located on Thien An hill and is only about 10km southwest of Hue city center. As one of the many years-old abandoned water parks in the world, this place becomes attractive to adventurous people, mainly foreign tourists and young people. 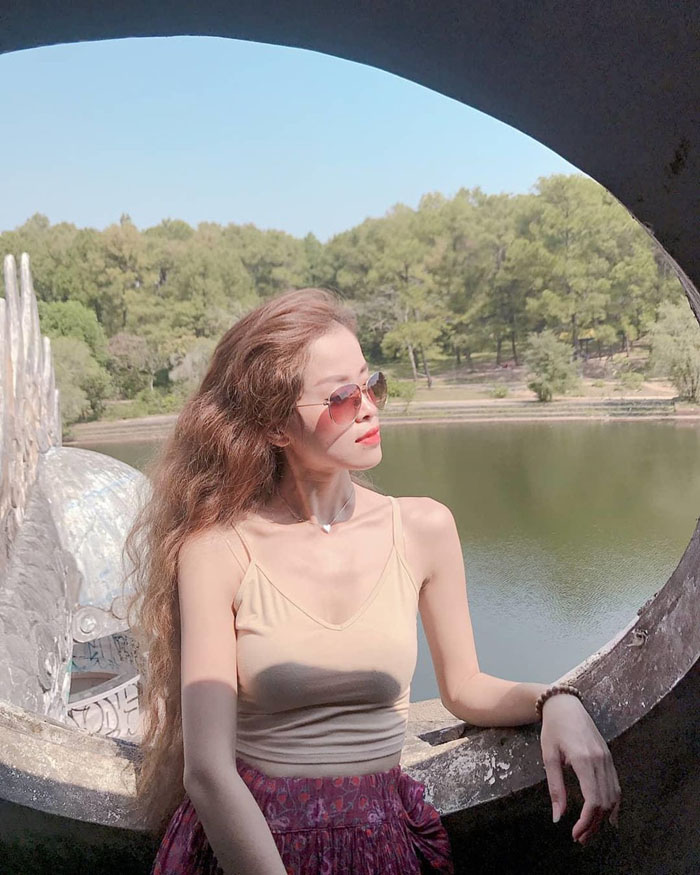 Check-in point that tourists should not miss when coming to Hue. Photo: bitrangnarry

Due to not being used and maintained, lying under wind and rain for many years, it is inevitable that many buildings are rusted by oxidation, even deformation. From the lake area, the dragon symbol in the middle of the lake to the meticulously decorated sculptures that are covered with moss, rough, peeling paint layers, ... All evoke the feeling of walking enter a fantasy world, spooky or get into real horror movie scenes.

The charming ghost scene of the abandoned park in Hue

Although abandoned for a long time, Ho Thuy Tien Park is still a destination to attract domestic and international tourists to check-in. The scene is creepy after years of abandonment. Photo: dronesforsalespain

From a distance, you can feel the fantastical atmosphere that covers the whole park. The closer you step forward and go completely inside, the desolate, crumbling landscape, the walls, the stone slabs and every little detail covering the green moss, the dust fades out before your eyes after a long period of abandonment wild. Like buildings that have not been used for a long time, unattended, or cared for by anyone, this abandoned park evokes a cold, creepy feeling of a deserted destination with rare shadows. Currently, almost all properties of Ho Thuy Tien park are rusted and dilapidated. The special resort is even more frightening when the surrounding scenery has a sad, cold, and difficult to describe in words. The area surrounding the park is also covered with trees and weeds. The scene evokes the feeling of horror movies. Perhaps that is why, although deserted and somewhat creepy, Ho Thuy Tien Hue has become a favorite destination for adventurous guests who love searching for strange and unique spaces. 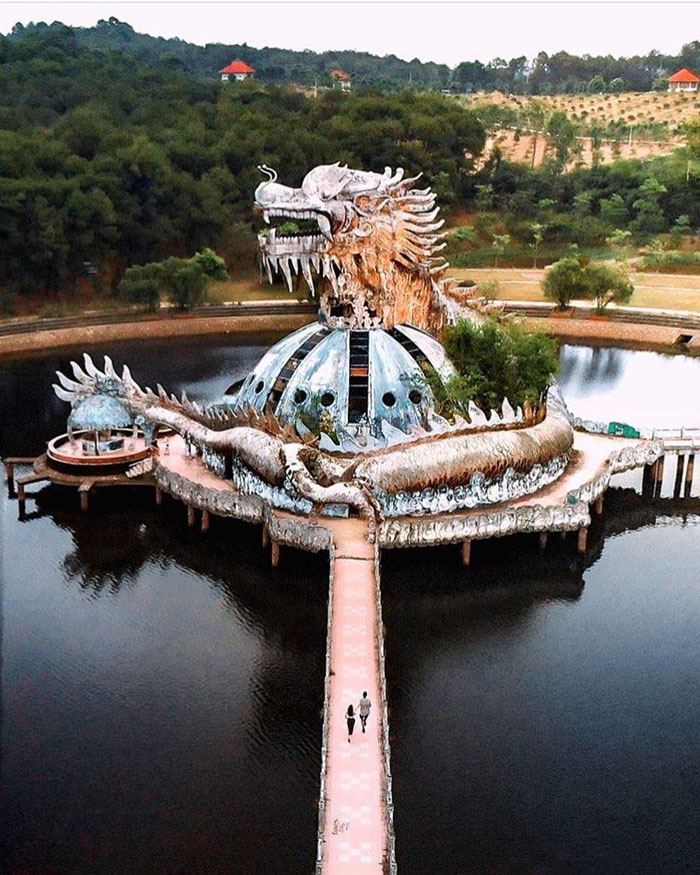 One of the places that many tourists spread about is not to be missed when checking-in at the abandoned park in Hue is the mouth of the dragon facing the lake. Because just a little clever expression, your photos here will be extremely impressive. Currently, Ho Thuy Tien water park is classified as the check-in point that tourists should not miss when coming to Hue.

However, it is recommended to keep in mind that you must be very careful when coming here, do not go alone or too few people to ensure safety because the campus is quite empty and murky and the items of many buildings is being seriously degraded. When standing near to take pictures, visitors need to observe carefully, away from places where there is a risk of collapse. 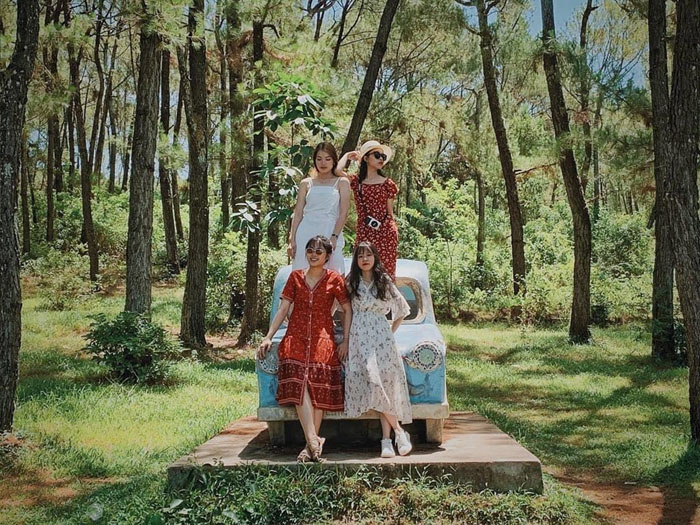 The aquarium playground used to be invested and built very meticulously and is the highlight of the park, but over the years it has become dilapidated, covered with moss and dust. Even, according to Hue travel experience and check in at Thuy Tien Lake, you need to pay great attention when entering here because the ceiling has been broken into large pieces long ago, revealing both steel and wire. Power out in danger is quite dangerous. And it seems to add to the spooky, desolate part of the abandoned playground scene, there is also the presence of patchy walls, covered with paint. 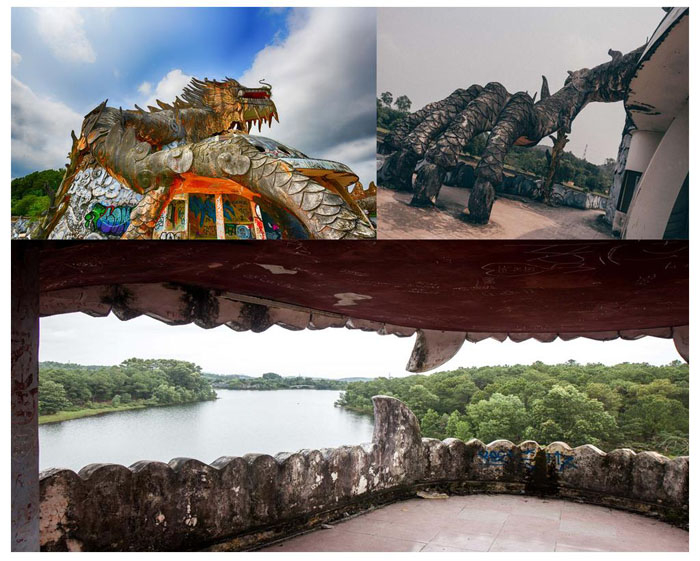 The aquarium once elaborately built is now in ruins. Photo: viettravel

Dragon statue in the middle of the lake

The point that attracts the most people to check in at Thuy Tien Lake Park - Hue  is probably the dragon statue in the middle of the lake, especially the dragon head, which is very majestic, mysterious and somewhat scary. Especially after being dressed in old and patchy colors. It is also because of such an unusual beauty that the young people coming here love to take pictures in this correct position. Indeed, what you need to do is just stand in the scene, you will get countless beautiful, unique, mysterious and mysterious photos without lack of romance. 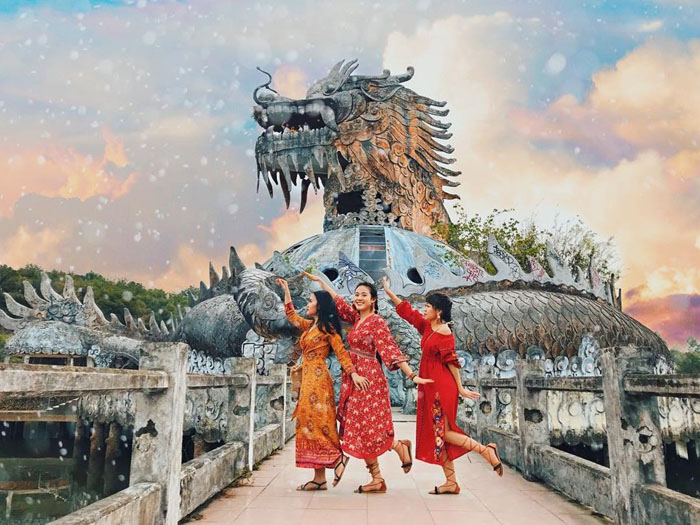 Dragon statue in the middle of the lake. Photo: Quynh.trang1811.

The stairs and slides were covered with moss

The ghost of the Thuy Tien lake park  is also clearly reflected through the spiral staircases covered with moss. Each long slide is as deep as it is surrounded by pristine trees, the old slides imprinting the time, making Thuy Tien lake more scary. And seemingly to increase the old part, in the water and theatrical performance area - the majestic stands that were once expected to be filled by 2,500 people were now just weed-covered venues. In addition, there are four bridges located in the four guides to the dragon model in the artificial lake now showing many cracks with peeling cement that makes people think of the ghost image, more scary.

Attractive experiences at the abandoned park in Hue

Ho Thuy Tien Park has been an amusement and entertainment area, although it was abandoned for a long time, when you come here, you will also have an interesting trip with countless unique experiences such as: check in at the symbol of Thuy Tien Lake - is a giant dragon statue curving on the roof of a building in the middle of the lake, taking virtual live photos with an ancient car, visiting the aquarium, exploring the water park and finally stopping admire the place that used to be a country music theater for a while. Don't forget to save yourself and your group of cool photos in these places.

However, due to being abandoned for a long time, the works, especially the area inside the aquarium have become desolate and ragged, so you also need to prepare yourself before entering so that you will not be scared. Remember to be very careful to stay safe. 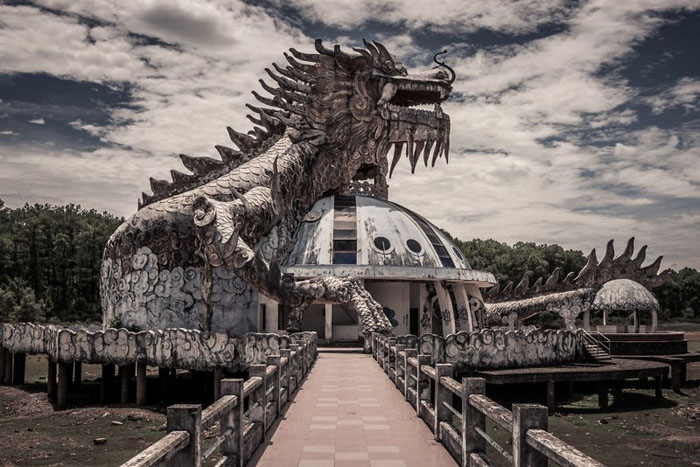 The famous abandoned park in Hue is about to be renovated. Photo: luxury-inside

Located near the road to Thuy Tien Lake is an area with many attractive Central tourist destinations such as: Vong Canh Hill, Hue Hill, Thien An Hill, Khai Dinh Tomb, ...

If you are planning to check in at  the abandoned park in Hue , remember to visit these places as well because you will experience and discover the mysterious beauty of the famous amusement park while traveling many other locations nearby.